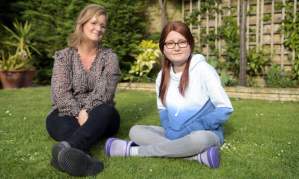 Top of the news today in the UK is the story of Isabelle Holdaway, the 17 year-old who has recovered from a serious infection untreatable with antibiotics using ‘phage therapy’.  Phages are viruses that eat bacteria.  They have been known for a century or more, but have not been seen as a potential mainstream treatment in most circles until now.

As you are probably aware, antibiotic-resistant bacteria or ‘superbugs’ are a growing problem.  Bacteria evolve, just like all life forms – and so it’s only natural that as time goes on, then evolutionary processes will result in bacteria which are adapted to survive antibiotics (which don’t evolve).  Phages, being viruses, also evolve, which is what makes them so interesting and useful; as superbugs evolve, then so do the phages which attack them.  What makes the Isabelle Holdaway case so interesting is that this is the first time that phages have been genetically modified (deliberately) to make them even more effective in a particular case.

Way back in 2002, Paul Jackson and I featured phage treatment in our book The Solutions Focus.  It was very little known at the time.  I was pleased that we could both spread the word about this interesting and different form of treatment, and also show it as a great metaphor for Solution Focused (SF) work.  Here is what we wrote back in 2002:

Every case is different – the strange story of ‘phage’
The development of antibiotics was one of the outstanding achievements of the 20th century.  These drugs – each of which can wipe out many kinds of disease-causing bacteria – have revolutionised our abilities to save lives.  Now, in the early years of the 21st century, the use of antibiotics is so widespread that certain bacteria are becoming immune to their effects.  This is potentially serious – what can be done when the major weapon against infection and disease is rendered ineffective?  One answer lies in using the power of selection.
Phage – viruses that infect and kill bacteria – were discovered during the First World War.  They were widely and effectively used in the 1920s and 1930s, until the development of antibiotics led to phage work being shelved.  Scientist in the Soviet Union kept the work going, and results from the Bacteriological Research Institute in Tblisi, now part of the independent state of Georgia, are attracting renewed attention in the West (Cookson, 1999).  The first well-documented case of an antibiotic-resistant infection being cured by phage was in 1999 in Toronto, where a female heart patient, dying from a strain of staphylococcus aureus that resisted all the available drugs, was given an experimental treatment.
Phage work in a different way from antibiotics. While one antibiotic can kill many different strains of virus, each strain of phages attacks only one particular strain of virus.  The phage seeks out its target, attaches itself to the bacterial cell and injects it with viral DNA.  Within minutes, hundreds of new phages grow inside the cell until the target is burst apart and killed, allowing the new phages to search for remaining target cells.  In this way, even a small dose of phage can eliminate a large bacterial infection in a few hours.
Given that each phage has a specific target, it is clearly critical to select the right phage to tackle the infection concerned.  At the Institute in Georgia, when a new phage is needed, the staff bring to bear the power of selection– using raw sewage as their starting point!  Rich in viruses and biological matter, a good bucket full of sewage contains vast numbers of different organisms – including (apparently) the required phage.  The question is – how to get it out?  Staff at the Institute grow the target virus on dishes in their laboratory, and smear liquid from the sewage onto the dishes.  They then wait, allow the bacteria to multiply, and see where on the dishes the virus is diminishing.  Samples from such places are grown on other virus-infected dishes to refine the resulting mixture.  Eventually, they isolate the relevant phage ready for the treatment. (Ref: Clive Cookson, Introduction to Germ Warfare. Financial Times, 30 October 1999)
There is a close parallel between the antibiotic and phage approaches, and conventional and Solutions Focused methods in organizations.  Just as the antibiotic attacks many strains of virus, the popular business and organizational theories work quite well in many cases.  In both the phage and solutions approaches, the solution that fits the situation is uniquely and efficiently selected from the whole swirling complexity of the starting point – be it the organization wanting change, or the bucket of sewage.
Phage are selected by matching potential viruses against the target, and seeing which works.  In the Solutions Focus, you sort out what’s working by means of questioning, acting and observing.
In both cases, our intention is to select the useful bits from the rest – and that’s all.  Each case requires a fresh platform to work on and another trawl through the bucket to find what works in this particular case.
Note that nothing is ‘changed’ here – the process is more one of identification, selection and allowing nature to take its course.  But the effect is decisive.  Similarly, you can view the Solutions Focus as being a means of shifting with very little ‘change’ – in fact, we often advise people to see how little they have to change to get results. (pp 206-207 in the second edition of The Solutions Focus, Nicholas Brealey Publishing 2007).

Welcome to the sfwork blog

Updates, new thoughts, events, links, books, connections and all the latest from Mark McKergow, Jenny Clarke and the team at sfwork, the Centre for Solutions Focus at Work.